Loadsmart, a New York-based startup that leverages AI and hundreds of data sources to automate truckload booking, today announced a $90 million round. The funding comes after the startup experienced 250% revenue growth between January and November and expanded its offerings to support rail transportation.

Loadsmart’s algorithms attempt to keep carriers within its network full and minimize empty miles — trips during which they aren’t carrying anything — by matching loads with roughly 900,000 available transport lanes. Freight shippers on the platform can request instant quotes that factor in the estimated time of loading, the commodity involved, and the overall load, after which they’re offered the choice of booking trucks directly or through Loadsmart’s APIs.

Loadsmart offers GPS-guided real-time cargo tracking through its web dashboard and mobile app, both of which issue notifications throughout every step of the delivery and fulfillment process. And it screens motor carriers daily to ensure what it claims are “the highest safety standards, insurance compliance, and reliability scores” in the industry.

In the five years since Loadsmart launched in the U.S., chief product officer Felipe Capella says the company has invested heavily in data analytics. Loadsmart recently analyzed all truck roadside inspections performed in the U.S. over the past few years to build a heat map of trucks stopped, which it used to profile trucking companies and the estimated 272,000 carriers running on U.S. roads. Moreover, it engineered an in-house system that automates the monotonous (and time-consuming) task of classifying shipping documents, including bills of materials and invoices, using machine learning.

More than 60% of Loadsmart’s loads today are sourced through algorithms, Capella says, and those algorithms have helped some of its clients reduce spot exposure and procurement execution time by up to 50% and 90%, respectively. In the case of Daimler Trucks North America (DTNA), Loadsmart says it reduced shipment processing time from five hours to 18 minutes and the lead time its carriers experienced in receiving payments from a month to just two days.

Loadsmart recently launched an add-on for Google Sheets and Microsoft Excel that gives shippers the ability to price and book shipments without having a transportation management system. In another milestone, last August Loadsmart completed an automated dispatch and delivery pilot with now-defunct autonomous vehicle startup Starsky Robotics. 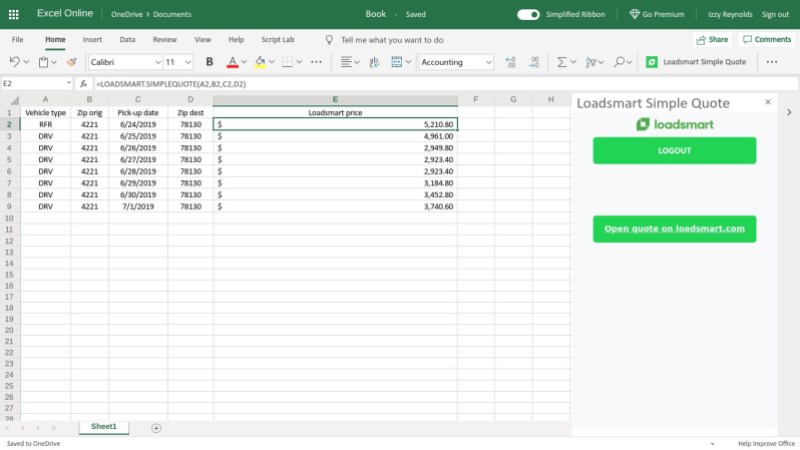 Above: The Google Sheets add-on for Loadsmart.

Loadsmart isn’t the only player in the digital freight broker business, of course. Seattle-based Convoy, which has raised hundreds of millions of dollars from backers such as Jeff Bezos and Bill Gates, boasts a platform called Dynamic Backup that optimizes routing guides from real-time, guaranteed prices for contractual freight. Transfix, which operates in New York, has an online marketplace that matches loads to drivers. And Uber recently extended its Uber Freight fleet management platform to small and mid-sized businesses.

But Salgado and Capella contend that Loadsmart is building on upward momentum. It already counts “several” Fortune 100 companies among its current and former customers, including the aforementioned Daimler and Anheuser-Busch InBev and Electrolux.

The series C round announced today was led by BlackRock and had participation from TFI International and Maersk. It brings Loadsmart’s total raised to over $146 million.