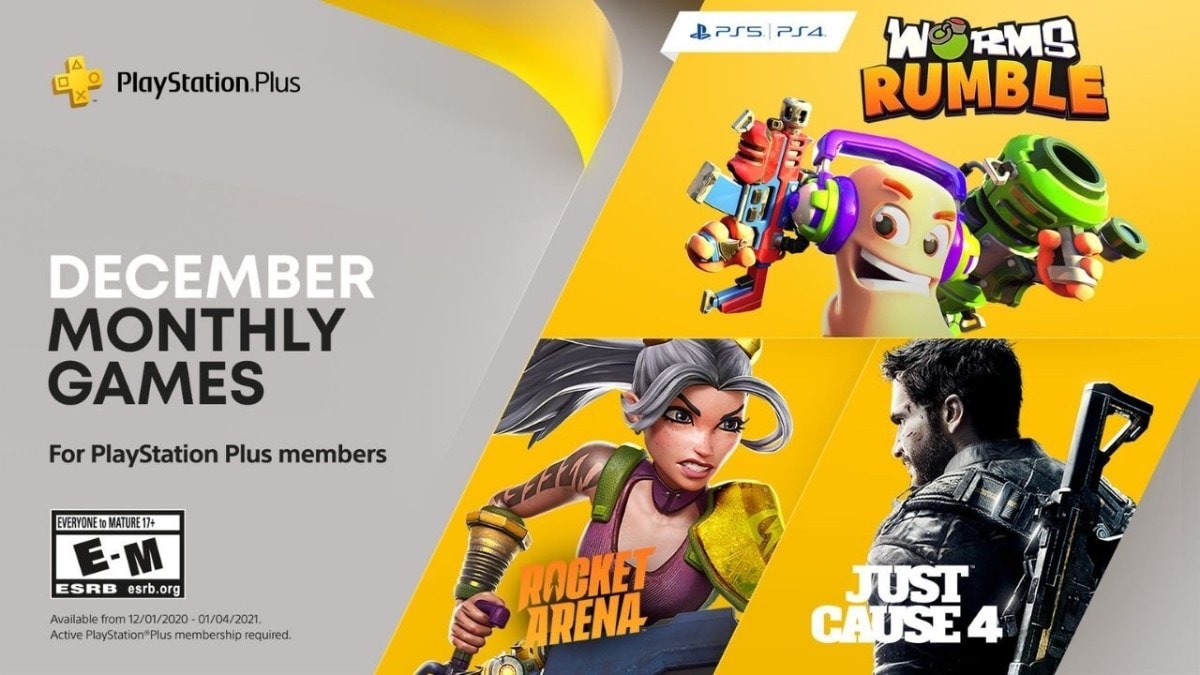 PlayStation Plus members will get their hands on Just Cause 4, Rocket Arena, and Worms Rumble for free. All three games will be available for download for both PlayStation 4 and PlayStation 5 users from December 1, 2020, to January 4, 2021. As always, you’ll need to have an active PlayStation Plus subscription to access the free titles. Last month, Bugsnax was made a part of the PS Plus lineup exclusively for PS5 users. The indie adventure will continue to be available for download until January 4, 2021. So, essentially, PS5 users will have access to four free titles this month through their PS Plus subscription.

An action-adventure that could put even Michael Bay’s over-the-top action sequences to shame, Just Cause 4 lets you take control of daredevil agent Rico Rodriguez as he plans to rid the fictional nation of Solis of the oppressive private militia, The Black Hand. Rodriguez will have his impressive arsenal of guns and rocket launchers to choose from, along with his trusty grappling hook to wreak havoc in the most intuitive ways. Developer Avalanche Studios made good use of its in-house Apex engine to introduce extreme weather conditions in the game, including tornadoes, blizzards, sandstorms, and more. Thanks to its creative gameplay and variety of missions, we rated the game 8 out of 10 in our review.

Just Cause 4 Complete Edition can be purchased via PlayStation Store for Rs. 999/ $17.49. Along with the main game, the Complete Edition also offers access to all Black Market/premium content and expansion packs.

Rocket Arena is a 3-on-3 competitive shooter that may remind you of Overwatch, thanks to its bright colour palette, fun gameplay, and impressive roster of heroes to choose from – each with their own special ability. Rocket Arena offers a host of in-game items such as Speed Boost and Rocket Magnet to help spice up each skirmish. The game was released in July this year, so gamers and streamers may wish to check out the title to take a break from usual competitive titles such as Fortnite and PUBG. The title is available for purchase on PlayStation Store for Rs. 409/ $4.99.

A part of the popular Worms tactical action series, Worms Rumble pits 32 players against each other in an intense arena-based last-worm-standing combat. The game offers a plethora of cheeky worm customisations and an impressive arsenal that comprises a bazooka and the much-coveted Holy Hand Grenade. Players can take part in seasonal challenges or quick daily challenges for additional XP and rewards. The game isn’t official released yet, so there’s no listing on the PlayStation Store at the time of writing.

Bugsnax from last month’s PS Plus lineup will be available for download for PS5 players until January 4 next year. Apart from the free titles, PS Plus subscribers on the PS5 have exclusive access to PlayStation Plus Collection, that offers access to a curated library of iconic PlayStation 4 (PS4) exclusives such as Bloodborne, God of War, and Uncharted 4: A Thief’s End. PlayStation Plus subscriptions are available in India at Rs. 499 for a month, Rs. 1,199 for three months, and Rs. 2,999 for 12 months.