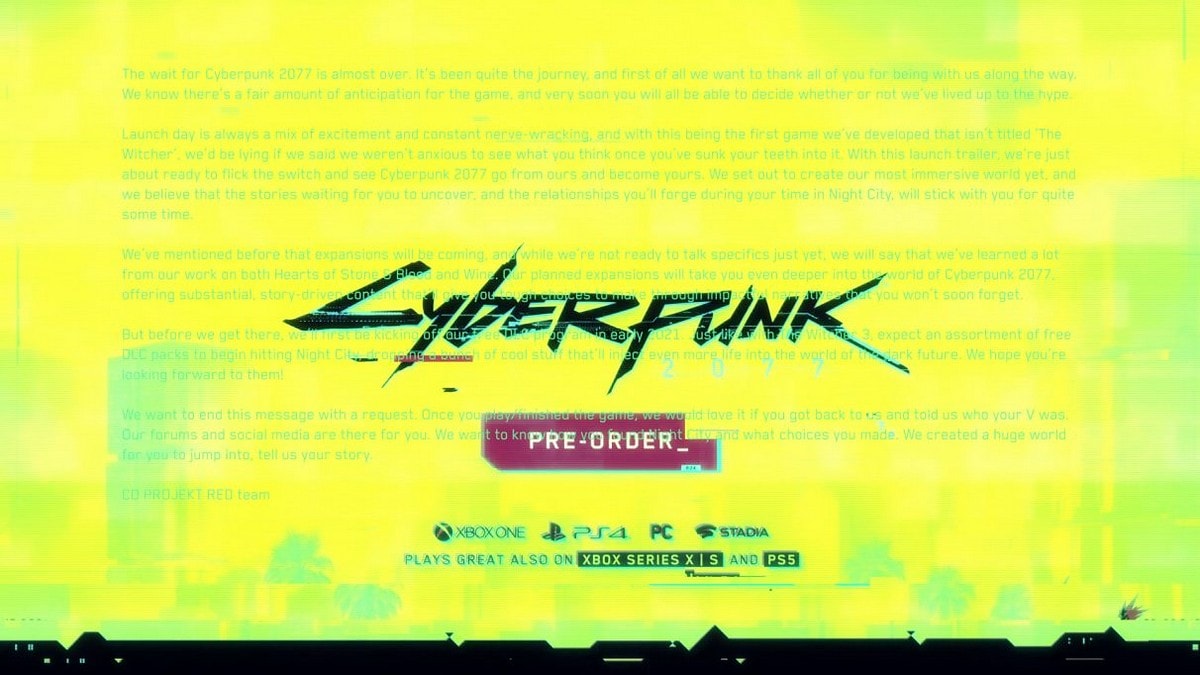 Cyberpunk 2077 will start getting free DLCs (Downloadable content) from early 2021, a hidden message in the latest trailer for the game has revealed. The hidden message was shared by an online publication and it states that “we’ll [CD Projekt Red] first be kicking off our free DLC program in early 2021.” Additionally, the game has reportedly earned at least $480 million in sales before it launched. Cyberpunk 2077 was released on December 10 and though it is being played by a millions of people, there a quite a lot of bugs and glitches in the game on PC and console players have reported the same.

The hidden message, as spotted by Rockpapershotgun, appears for a single fame in the latest launch trailer towards the end. It has a message from CD Projekt Red for the fans talking about future expansions and DLCs. It states the team has learnt a lot from the ‘Hearts of Stone’ and ‘Blood and Wine’ expansions for The Witcher 3: Wild Hunt, and that the planned expansions will “take you even deeper into the world of Cyberpunk 2077, offering substantial, story-driven content that’ll give you tough choices to make through impactful narratives that you won’t soon forget.”

It goes on to state that the free DLC programme for Cyberpunk 2077 will start from early 2021. “But before we get there, we’ll first be kicking off our free DLC program in early 2021. Just like with The Witcher 3, expect an assortment of free DLC packs to begin hitting Night City, dropping a bunch of cool stuff that’ll inject even more life into the world of the dark future.”

The developers did not share an exact timeline for the DLCs or what they will be. For The Witcher 3, the DLCs included outfits, new quests, and a New Game+ mode.

Meanwhile, Cyberpunk 2077 pre-orders numbered 8 million copies, CD Projekt Red announced on Twitter. At roughly $60 a copy, would amount to around $480 million (roughly Rs. 3,533 crores) in sales before it launched. Then at launch, the game saw over 1.1 million concurrent viewers on Twitch. Similarly, on Steam, Cyberpunk 2077 took the top spot for most concurrent players becoming the first single player game to do so.

As popular as the game may be, it has its short comings. On PC, reviewers and players alike have reported a lot of bugs and glitches, some minor and some quite severe. This is especially true for players on the PlayStation 4 and Xbox One, and a report by Polygon points out that a number of these players have faced crashes, freezes, choppy gameplay, geometric issues with NPCs, and more. Some PS4 players have experienced screen tearing, missing textures, frame rate drops, low resolution, and other bugs that are ruining their experience. Several of these issues are persistent even after the Day One patch.

Further, some PC players are getting ‘Whoa! Cyberpunk 2077 has flatlined’ error when trying to start the game. The cause for this issue is unclear but restarting the PC, updating GPU drivers, and shutting down unwanted programs seem to fix this issue for some.