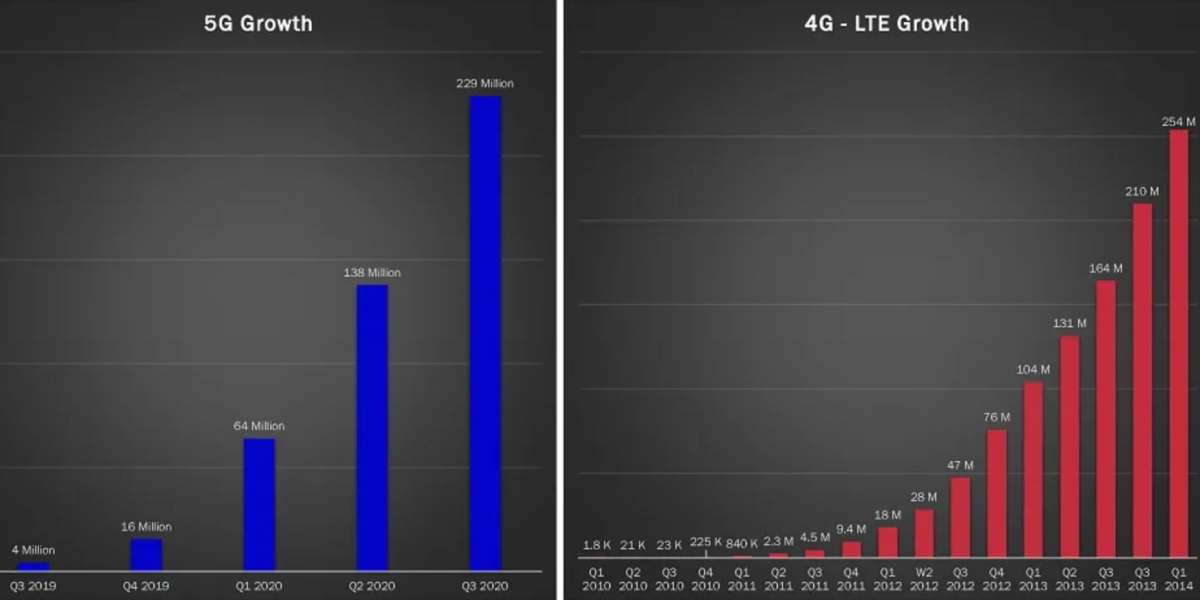 Although the global pandemic could have slowed it down, 5G cellular technology isn’t just continuing its steady march towards ubiquity — it’s actually being adopted at a much faster pace than prior-generation 4G LTE, according to industry trade organization 5G Americas. As of December 2020, there are now 143 commercial 5G networks across the globe, 303 commercially available 5G devices, and 229 million total 5G subscriptions, with 225 million in the last year alone. That means 5G adoption is proceeding at a pace four times faster than 4G, 5G Americas notes, making it the “fastest growing mobile technology in history.”

The rapid pace of 5G adoption is significant for technical decision makers because the wireless technology is setting the stage for a massive increase in the quantity of data that enterprises will process during this decade. 5G networks promise to improve data speeds by a factor of 10 to 100 times compared with 4G, enabling devices to share both larger chunks and more continuous streams of data, while driving enterprises to adopt edge servers for low latency data processing and serving. Significant recent upticks in global adoption suggest that the time for enterprises to embrace 5G is now, rather than later.

Beyond consumer applications in smartphones, which include everything from commercial and location data to live video and augmented reality feeds, 5G networks will be the conduits for wireless industrial automation, connected autonomous vehicles, and smart cities. American, Asian, European, and Middle Eastern leaders have consequently pushed for rapid 5G adoption in an effort to speed the digitization of their societies, as well as supporting local development of AI-assisted products and services.

As contrasted with last year, 5G advances aren’t just limited to several key countries any more — adoption is proceeding across the globe. In the last quarter alone, 29 new 5G networks went live, and the total number of networks is expected to grow to 180 worldwide by the end of 2020. Similarly, 5G America suggests that there will be 236 million 5G subscriptions by December 31, a number of subscribers that took 4G LTE four years to achieve. But the growth isn’t necessarily happening evenly across the map.

Only 20 of today’s 5G networks are located in North America, Latin America, and the Caribbean, numbers that are still dwarfed by 4G LTE, which is currently used in 145 networks within those regions alone. North America posted 3.4 million 5G subscriptions, up 47% for the last calendar quarter, which notably ended before the release of popular, 5G-compatible iPhone 12 models. But 5G Americas says that the latest standard is “just beginning” to pop up in Latin America and the Caribbean, with fewer than 5,000 total subscriptions across that region — well below prior forecasts. On a positive note, Brazil has increased 5G service availability in urban areas, and 5G spectrum is being allocated for expansions in Chile, the Dominican Republic, and Peru.

5G expansion has continued at a blistering pace in Asia, where South Korea and China have led the region in speeds and breadth of deployment, while some countries in the Middle East have posted impressively fast download rates in smaller geographic areas. European capitals have continued to advance their 5G deployments, delayed somewhat by the need to limit or tear out equipment provided by Chinese network vendor Huawei, which was branded an international security risk by the United States — a claim Huawei has repeatedly denied.