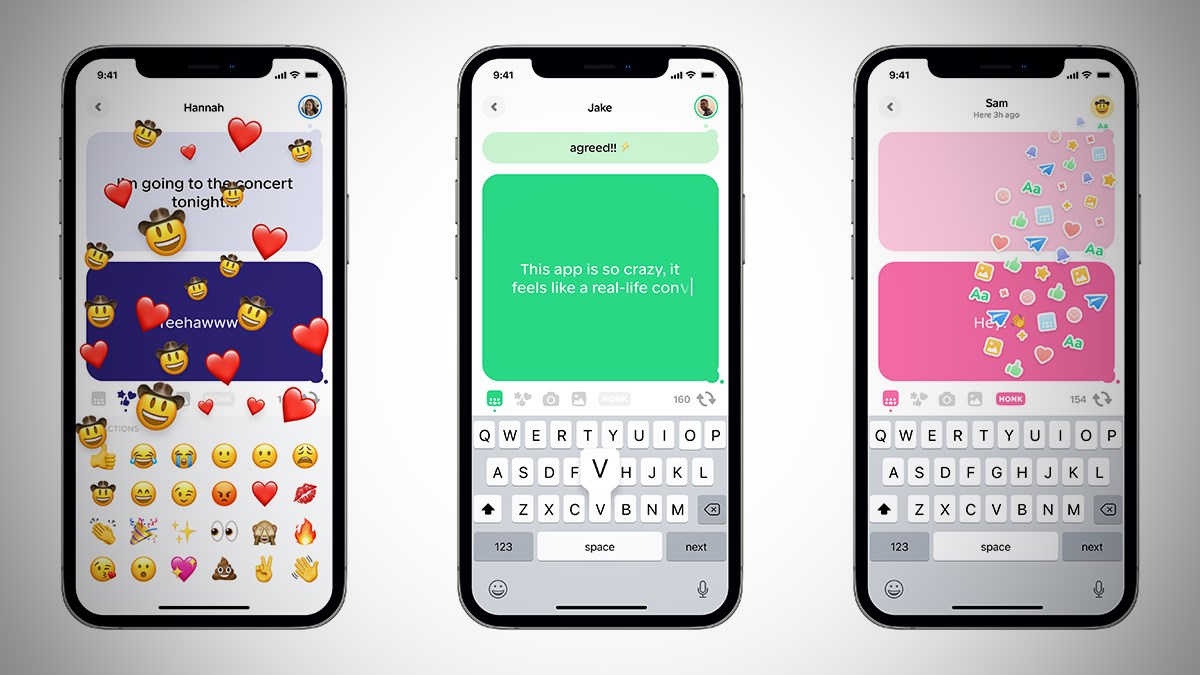 Honk wants to usher in real-time messaging. Instant messaging? That’s passé for Honk. The iPhone-only app launched Tuesday globally after months of testing, with the promise of an in-the-moment messaging experience. On Honk, your messages are shown to the other person as you type, right down to that typo, extra space, or the pause to think something over. There is no send button because there’s no need for it. And you only have 160 characters (about the size of a traditional SMS text message) to convey your thoughts. Once you hit the limit, you hit a refresh button to start from scratch. Predictably, Honk has no chat history.

In a way, Honk is essentially taking Google Docs’ real-time collaboration and fusing it with the concept of disappearing messages, pioneered by Snapchat and since adopted by almost everyone including Facebook across its suite of apps, including WhatsApp and Messenger. Honk is unlike most messaging tools but it’s still going up against all of them due to sheer network effect. And in India it has the added hurdle of not being on Android yet, where most of the country’s smartphone users are.

🗣️ Need to get someone’s attention fast? Honk them! They’ll get a notification to come to the chat. If it’s super important, you can spam the Honk button — that’s hard to miss. pic.twitter.com/VqcinmeeT2

At this point, you’re probably wondering why it’s called “Honk”. Well, that’s because the app literally has a Honk button to help you get someone’s attention. The other person will be flooded with notifications if they’re outside the app, or an array of emoji if they’re in the app. Yes, you can repeatedly hit the Honk button just as most Indian drivers do on the road — I just realised how thankful I am of all the car honks I’ve been saved from, thanks to the lockdown. And because Honk is designed around being in the moment, it will notify people the moment someone leaves a chat.

Honk has a bunch of customisation features too. You can change the colour of the conversation bubbles (the top one shows incoming messages, you type in the bottom one). You can pick the emoji skin colour you prefer, which will reflect everywhere across Honk. And you can also assign certain emoji to a word or phrase. Honk calls it “Magic Words”. Every time you type the said word or phrase, the emoji you selected will appear next to the word and float up. Emojis have their own section called “Reactions”, wherein tapping on preselected emoji creates an effect similar to iMessage’s “Send with Echo”. You can type in regular emoji using your keyboard too. The one thing that Honk seems to be missing right now is a dark mode.

✨ With Magic Words, you can assign any emoji to any word or phrase, which automatically trigger effects as you type. It’s the best way to personalize your chats and bring them to life. Set up to 50 unique Magic Words per chat! pic.twitter.com/2BYUyNrEzz

The app is clearly aiming at Gen Z, given the age selection options at the beginning. You can pick any age between 13 and 21, but everyone older than that is grouped into 21+. Honk has shot up the App Store charts since its public launch; it’s currently ranked #11 in the US and #15 in Canada. In India, it’s at a much further #53 (all ranks are for the social networking category). That surge in interest hasn’t been handled very well though, with Honk admitting that it was dealing with some issues in the early hours after rollout, including users being shown offline even though they weren’t.

Honk is available for free on the App Store worldwide.

Further reading: Honk
Akhil Arora
Akhil Arora covers entertainment for Gadgets 360, interviewing stars such as Christian Bale and Anurag Kashyap, covering series premieres, product and service launches across the globe, and looking at American blockbusters and Indian dramas from a global socio-political and feminist perspective. As a Rotten Tomatoes-certified film critic, Akhil has reviewed over 150 movies and TV shows in over half a decade at Gadgets 360. When he is not completely caught up with new film and TV releases, Akhil
…More