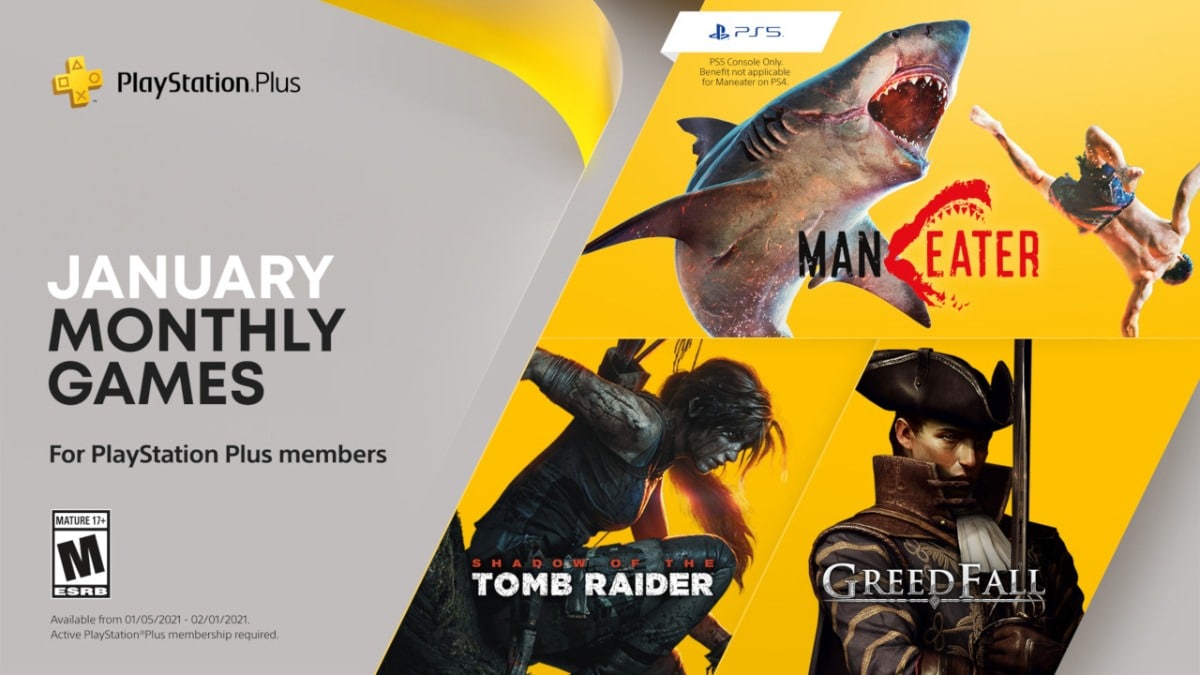 PlayStation Plus subscribers can kick off 2021 with an impressive selection of free games – Maneater, Shadow of the Tomb Raider, and Greedfall. While PlayStation 5 users can get their hands on all three games, PlayStation 4 users will get free access to just the last two. Since Sony launched the next-gen PS5 in November, it has been looking to offer a free game exclusively for the new console. With Maneater, it appears to have set the ball rolling. The PlayStation 5-version of the title has been specially upgraded to show off the console’s hardware prowess, including ray-tracing support and 4K resolution at 60 fps. PS5 players can also access the other two titles via backwards compatibility.

All three games will be available for download starting Tuesday, January 5, until February 1, the company announced in a blog post. Both PS5 and PS4 players will still have access to last month’s free game lineup – Just Cause 4, Rocket Arena, and Worms Rumble – until Monday, January 4. As an added bonus for PS5 owners, indie launch title Bugsnax will still be available for a last round of downloads until January 4. Here’s a quick look at the free games on offer for PS Plus subscribers in January:

If you’ve seen the Steven Spielberg-classic Jaws, you won’t face much problem in understanding what Maneater’s all about. You start off as a baby shark (do-do-do-do-do-do) and your goal is to become an apex predator by chomping down humans and other aquatic monsters. The open-world RPG, or SharkPG, is actually a whole lot of fun. It involves a surprisingly-detailed levelling up structure, and there’s a certain joy in seeing your wee little fish grow into a super-powered monster. It may not require too many skills to execute the perfect kill, but the game offers enough options to players to find their own playing style at their own pace.

Shadow of the Tomb Raider

The third chapter in the Lara Croft franchise reboot trilogy, Shadow of the Tomb Raider continues Lara’s journey from 2015’s Rise of the Tomb Raider as the adventurer races through the wild jungles of South America to stop a Mayan apocalypse. While the action-RPG may not be as great as the first two titles in the series, it still offers some memorable moments and tense encounters, making it a good-enough title to spend a few hours with, especially since its free.

If you aren’t a PlayStation Plus subscriber, you can purchase the title via PlayStation Store for Rs. 874/ $14.99.

Developed by French studio Spiders, Greedfall allows players to take a deep dive into the world of old-school RPG mechanics as they explore a medieval island and fend off invaders, supernatural threats, while experiencing a surprisingly engaging story. A sleeper hit, Greedfall is sure to keep gamers busy for hours.

If you aren’t subscribed to PlayStation Plus, you can purchase the game via PlayStation Store for Rs. 2,999/ $49.99.