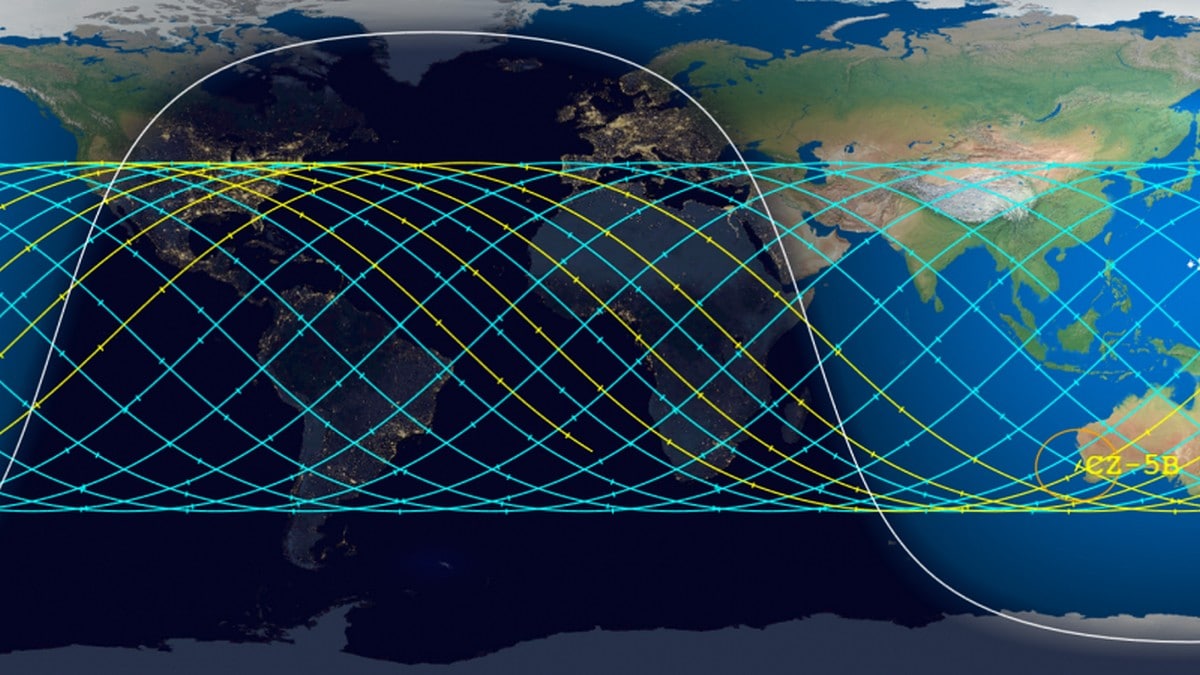 Remnants of China’s largest rocket launched last week are expected to plunge back through the atmosphere late Saturday or early Sunday, a US federally funded space-focused research and development centre said.

China’s foreign ministry said on Friday that most debris from the rocket will be burned up on re-entry and is highly unlikely to cause any harm, after the US military said that what it called an uncontrolled re-entry was being tracked by US Space Command.

In a tweet sent on Friday evening in the United States, the Aerospace Corporation said that the latest prediction for the re-entry of the Long March 5B rocket body by its Center for Orbital Reentry and Debris Studies (CORDS) was for eight hours on either side of 0419 GMT (9:49am IST) on Sunday.

All blue and yellow lines are a single overlapping line representing the ground path below the elliptical orbit of the #LongMarch5B rocket body. Here is a handy guide explaining the graph, with a link to a Q+A with one of our debris experts: https://t.co/UYhpPwTSOl

CORDS’ latest “informed prediction” of the rocket body’s re-entry location was given near the North Island of New Zealand, but it noted that re-entry was possible anywhere along paths covering large swathes of the globe.

The Long March 5B – comprising one core stage and four boosters – lifted off from China’s Hainan island on April 29 with the unmanned Tianhe module, which contains what will become living quarters on a permanent Chinese space station.

The Long March 5 family of rockets have been integral to China’s near-term space ambitions – from the delivery of modules and crew of its planned space station to launches of exploratory probes to the moon and even Mars.

The Long March launched last week was the second deployment of the 5B variant since its maiden flight in May last year.

Harvard-based astrophysicist Jonathan McDowell previously told Reuters there is a chance that pieces of the rocket could come down over land, perhaps in a populated area, as in May 2020, when pieces from the first Long March 5B rained down on the Ivory Coast, damaging several buildings, though no injuries were reported.

Debris from Chinese rocket launches is not uncommon within China. In late April, authorities in the city of Shiyan, Hubei province, issued a notice to people in the surrounding county to prepare for evacuation as parts were expected to land in the area.

“The Long March 5B re-entry is unusual because during launch, the first stage of the rocket reached orbital velocity instead of falling downrange as is common practice,” the Aerospace Corporation said in a blog post.

“The empty rocket body is now in an elliptical orbit around Earth where it is being dragged toward an uncontrolled reentry.”

The empty core stage has been losing altitude since last week, but the speed of its orbital decay remains uncertain due to unpredictable atmospheric variables.

It is one of the largest space debris to re-enter Earth, at 18 tonnes.

The core stage of the first Long March 5B that returned to Earth last year weighed nearly 20 tonnes, surpassed only by debris from the Columbia space shuttle in 2003, the Soviet Union’s Salyut 7 space station in 1991, and NASA’s Skylab in 1979.