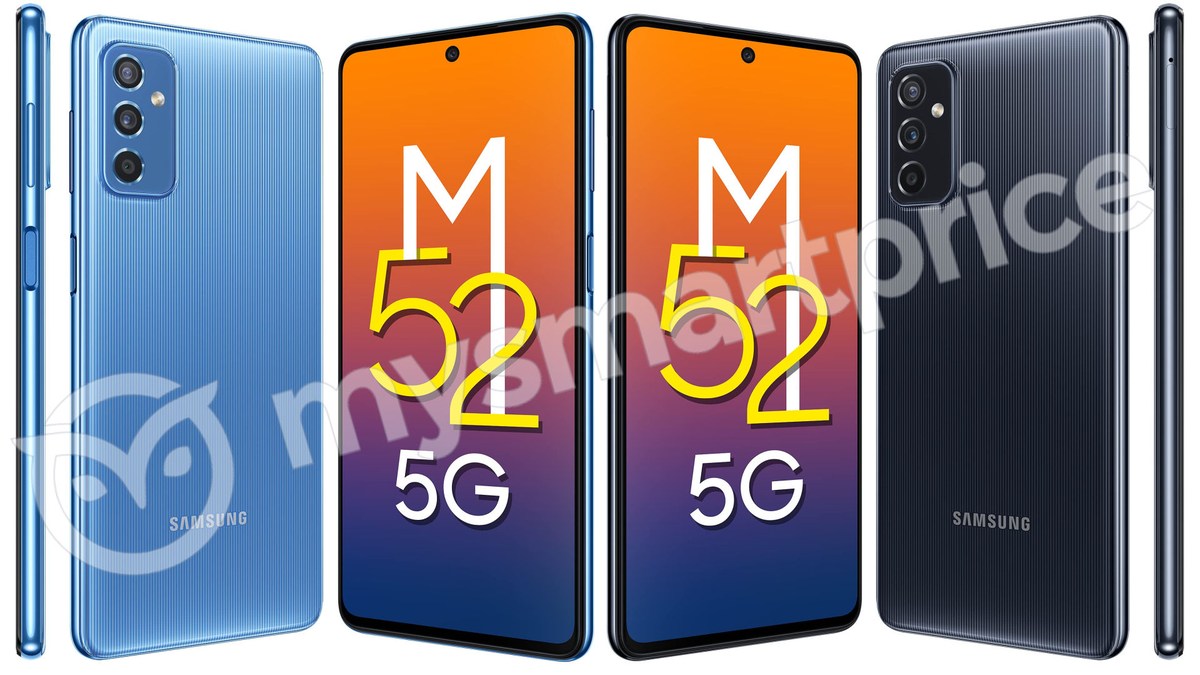 Samsung Galaxy M52 5G is expected to launch soon. Ahead of its launch, official looking-renders and key specifications of the phone have surfaced online. The smartphone is tipped to come with a 120Hz refresh rate and pinstripe-style design for the back panel. Recent reports suggest that the Galaxy M52 5G will be launched sometime in September. The smartphone’s launch in India also seems imminent as its support page — along with that of Galaxy F42 5G — have been spotted on Samsung’s India website. The Samsung Galaxy M52 5G was also been spotted on the Bureau of Indian Standards (BIS) website.

Tipster Ishan Agarwal, in collaboration with MySmartPrice, has shared some official-looking renders of the upcoming Samsung Galaxy M52 5G. The renders show that the phone’s screen is flat and has a centrally placed hole-punch cutout for the selfie camera. It is also said to have an AMOLED display with a 120Hz refresh rate. The bezels on the three sides are slim with a slightly thicker chin.

The Samsung Galaxy M52 5G renders show a pinstripe-style design on the back panel and a triple rear camera setup housed in a rectangular module with a Samsung logo etched near the bottom. On the right spine, the renders show a fingerprint scanner embedded in the power button along with a volume rocker. There seems to be a SIM tray on the right side. The leak also mentions that the smartphone will measure 164x76x7mm and weigh 175 grams.

A previous report mentions that the Galaxy M52 5G will get a 64-megapixel primary sensor, a 12-megapixel wide-angle sensor, and a 5-megapixel macro sensor. The smartphone is also said to come with a 32-megapixel selfie sensor.

Samsung Galaxy M52 5G, along with the Galaxy F42 5G, is reported to be launched in India before the end of September. The former has also been spotted in a BIS listing and an India support page — both hinting at its imminent launch in the country.

A previous leak suggests that the Galaxy M52 5G will be powered by a Snapdragon 778G SoC and come in 6GB RAM or 8GB RAM variant with 128GB of onboard storage. It says the phone will feature a 6.7-inch full-HD+ (1,080×2,400 pixels) Super AMOLED display with Corning Gorilla Glass 5.

Are the Galaxy Z Fold 3 and Z Flip 3 still made for enthusiasts — or are they good enough for everyone? We discussed this on Orbital, the Gadgets 360 podcast. Orbital is available on Apple Podcasts, Google Podcasts, Spotify, Amazon Music and wherever you get your podcasts.
Affiliate links may be automatically generated – see our ethics statement for details.
This article was originally published by Ndtv.com. Read the original article here.
Share on Facebook
Share on Twitter
Share on Pinterest
Share on LinkedIn