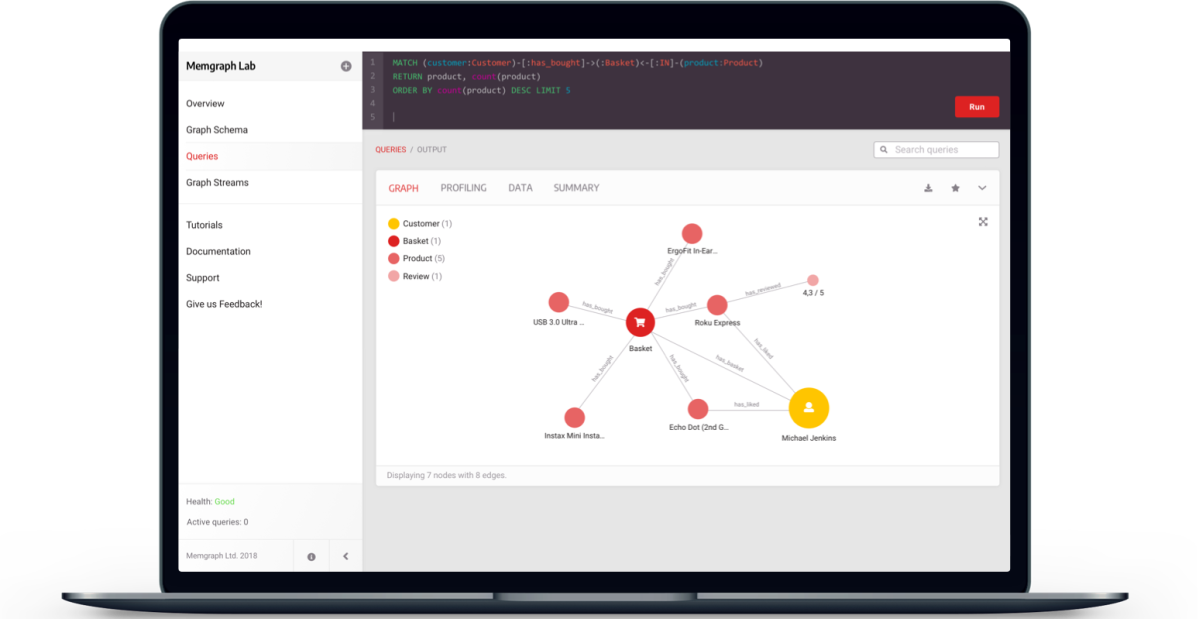 Memgraph, a real time graph database provider, today announced that it has raised $9.34 million in seed funding led by Microsoft’s M12. The company also launched its community and enterprise editions into general availability.

Graph databases underpin many modern applications, enabling everything from social networks to fraud detection software to extract insights by joining the dots between pieces of data that aren’t obviously related. Ever wondered how Facebook makes such eerily good friend recommendations? Graph databases.

“Our customers’ biggest pain point is the inability to analyse and gain insights from multiple data sources that allow them to build applications on top of them,” Memgraph cofounder and CEO Dominik Tomicevic told VentureBeat. “Memgraph allows them to connect all data sources seamlessly into a unified network structure to uncover hidden relationships between their data on top of which they can apply advanced graph algorithms and analytics.”

Insurance firms, for example, can use Memgraph to ingest data about customers, accidents, and previous insurance claims to identify fraud. “PageRank and community detection algorithms detect anomalies and provide insights about the claims, that are then used to build dashboards and alert systems for fraudulent claims,” Tomicevic continued.

Tomicevic noted that his company’s typical customer are enterprises in the chemical, manufacturing, and financial services space, which require real time insights from myriad disparate data sources. Most large companies use the Memgraph enterprise edition, but those with smaller-scale deployments will likely elect to use the community incarnation. “The Memgraph community edition can be used by outfits from indie developers and up, for both commercial and solo projects,” Tomicevic said.

The community edition is available under a Business Source License (BSL), meaning that it’s “source-available” rather than open source, though Tomicevic noted that it offers most of the freedoms that a developer would want from a graph database product while allowing it build a profitable business. The decision to go for source-available was born from observing recent activities elsewhere in the open source space, including Amazon’s spat with Elastic which led to a whole new Elasticsearch fork after Elastic abandoned its open source model. Similarly, Cockroach Labs switched its CockroachDB SQL database from open source to a BSL license a few years back to prevent giants such as Amazon from offering it “as-a-service”.

“We’ve witnessed the rise of integrated cloud providers who take OSS (open source software) products and create their own offerings,” Tomicevic explained. “To respond to that, we’ve decided to adopt an extremely permissive version of the BSL, which gives users all the important open source benefits — the right to inspect, right to repair, right to improve, and deploy to production without restrictions on scalability, performance, or data size. The community gets all this, yet Memgraph is still able to build a business and continue investing in R&D that benefits everyone.”

On the enterprise side, Memgraph offers companies wishing to deploy on-premises and in their own clouds various security and compliance features and services, as well as full technical support and service level agreements (SLAs). And then there is the cloud-based Memgraph offering, which is a fully-managed and hosted affair.

The state of play

Notable players in the commercial graph database space include Microsoft, AWS, Oracle, and IBM, though there are several sizable venture capital-backed incumbents too such as TigerGraph and Neoj4, which raised $105 million and $325 million respectively in the past eight months. Elsewhere, open source newcomer TerminusDB recently closed a $4.3 million seed round as it seeks commercialization.

Put simply, the graph database market is already busy. So what, exactly, is Memgraph bringing to the table?

“Where we feel Memgraph stands out is that we provide cutting edge network analytics — technology typically exclusive to big tech companies like Google and Facebook — and allow developers to use these insights and leverage the graph to build powerful applications with ease,” Tomicevic said.

Memgraph had previously raised $8.8 million across several tranches dating back to its inception in 2016. Its latest seed investment ushered in a slew of investors aside from Microsoft’s VC arm, including Heavybit Industries, In-Q-Tel, Counterview Capital, ID4 Ventures, and Mundi Ventures.