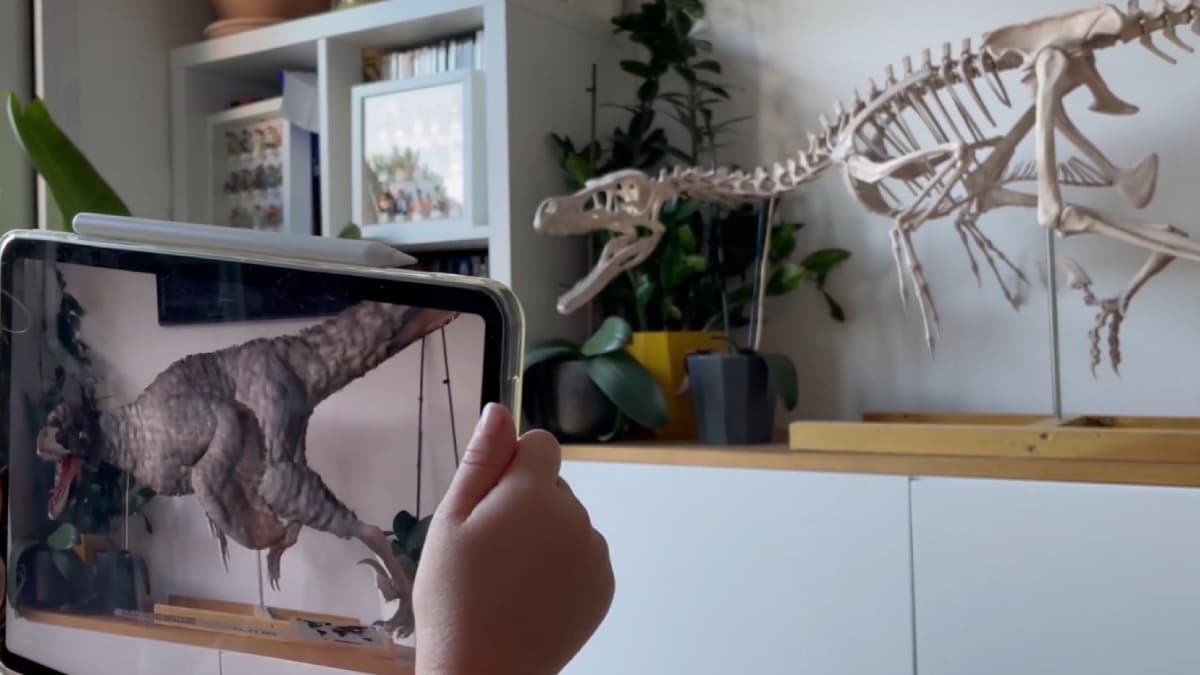 An augmented reality (AR) professional 3D-printed a full-scale Velociraptor for his daughter and went on to bring it to life (virtually). A video shared by Florent Germain on Twitter shows the results of this fun experiment. Germain tweeted on October 20, “Last month, I 3D printed a full-scale Velociraptor for my daughter. Then, I went to augment it in AR with Vuforia Model Target, so she could see what it (could have) looked like, and how big or small were its Velociraptorinae relatives.”

The video shows how the Velociraptor was brought to life using some software applications. The extinct dinosaur was fleshed out in full details. In fact, its eyes could be seen moving in the clip. The AR tool not only enlivened the 3D-printed skeleton but also gave a visual comparison in proportion among Velociraptor and other related species like Deinonychus antirrhopus, Microraptor zhaoianus, and Utahraptor Ostrommaysi.

Last month, I 3D printed a full scale Velociraptor for my daughter. Then, I went to augment it in AR with Vuforia Model Target, so she could see what it (could have) looked like, and how big or small were its Velociraptorinae relatives ! #ar #vuforia #dinosaur #3dprinting pic.twitter.com/zTsInqvVKr

Germain added a tweet to the thread and mentioned the software he used. “The 3D model of the skeleton is by InhumanSpecies on Cults3D. The feathered dino was sculpted in Blender,” he wrote.

The 3D model of the skeleton is by InhumanSpecies on Cults3D (https://t.co/GGwZzwSVoN). The feathered dino was sculpted in Blender (great learning experience), using @JaimeHeadden body outline as a guide and references from @FredtheDinoman @CorbinRainbolt and Matt Martyniuk.

According to the Twitter thread, Germain is also planning to submit this AR creation to a Paleoart Contest.

@CorbinRainbolt Also, I don’t know if this meets the requirements for a submission, but I’d be happy to submit it otherwise ! Wasn’t sure I’d make it to the deadline 🙂 https://t.co/YoDwjc6TdC

A user (@Harrison_kade) commented on the post, recommending this kind of technology for museum displays.

Germain also stated that AR would make it easy to update new sound data in this regard.

I think so too. And it could be easily updated when new data emerges or to display different possibilities when there are uncertainties.

Here’s what another user (@VRmaninJapan) said about the wonderful creation.

Another intrigued user (@clairemation) asked if the files were up for sale.

This is SOOOO cool!! Are you releasing/selling the files?

AR and 3D-printing are becoming more popular in a diverse range of applications these days. Germain’s creation is a fine example.