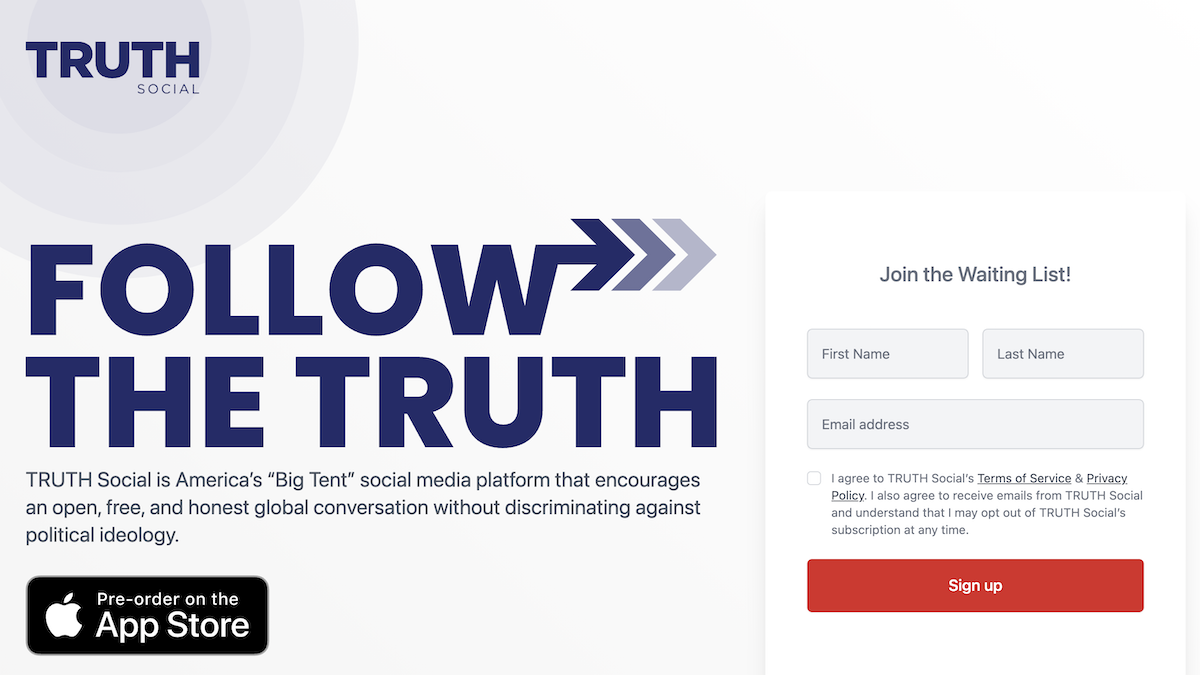 Former US President Donald Trump will launch his own social media app, TRUTH Social, that he said would “stand up to Big Tech” companies such as Twitter and Facebook that have barred him from their platforms.

TRUTH Social will be created through a new company formed by a merger of the Trump Media and Technology Group and a special acquisition company (SPAC), according to a press release distributed by both organisations.

“We live in a world where the Taliban has a huge presence on Twitter, yet your favourite American President has been silenced. This is unacceptable,” Trump said in a written statement included in the release.

The social network, set for a beta launch next month and full rollout in the first quarter of 2022, is the first of three stages in the company’s plans, followed by a subscription video-on-demand service called TMTG+ that will feature entertainment, news, and podcasts, according to the news release.

In a slide deck on its website, the company envisions eventually competing against Amazon’s AWS cloud service and Google Cloud.

A Trump representative who declined to be named confirmed the contents of the TMTG news release to Reuters. Trump spokesperson Liz Harrington also tweeted a copy.

“For so long, Big Tech has suppressed conservative voices,” the former president’s son, Donald Trump Jr., told Fox News in an interview. “Tonight my father signed a definitive merger agreement to form what will ultimately be the Trump Media and Technology Group and TRUTH Social – a platform for everyone to express their feelings.”

Twitter, Facebook, and other social media platforms banned Trump from their services after hundreds of his supporters rioted at the US Capitol on January 6.

That protest came after a speech by Trump in which he falsely claimed that his November election loss was due to widespread fraud, an assertion rejected by multiple courts and state election officials.

Trump Media & Technology Group will receive $293 million (roughly Rs. 2,190 crores) in cash that Digital World Acquisition had in trust, assuming no shareholder of the acquisition firm chooses to redeem their shares, according to the statement.

Orlando, who has worked at Deutsche Bank and BT Capital Markets, has launched at least four SPACs and has plans for two more, according to his firm’s website and regulatory filings.

But none of the SPACs have completed a deal yet. A China-based SPAC that Orlando led failed last month to complete a merger with Giga Energy that would have valued the transportation solutions provider at $7.3 billion (roughly Rs. 54,650 crores), because it could not deliver the cash required, according to regulatory filings.

Shareholder redemptions reduce the amount of cash that Digital World Acquisition will have available to give to Trump Media & Technology Group at the closing of the deal.

The companies said in the statement that the completion of the merger is subject to redemptions not exceeding an agreed minimum cash requirement. The statement did not disclose what the requirement is, though that detail is typically contained in a regulatory filing that should follow on Thursday.

The deal values Trump Media & Technology Group at $875 million (roughly Rs. 6,550 crores), including debt, according to the news release.